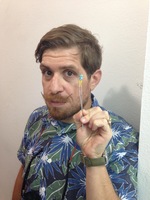 Born in Brooklyn during the fateful summer of 1977, it is likely Ulivo's first sights were of a son of sam shooting, the great blackout and the filming of Saturday Night Fever.

Of humble parentage, Ulivo enjoyed an uneventful early childhood. During his toddler years it became clear he had a way with legos. So gifted was he that word spread, first throughout out the U.S. then onto Europe and eventually to Denmark, home of the Lego Corporation.

Many say an offer was made by Kjeld Kirk Kristiansen, to have Christopher relocated to Lego headquarters in order to be studied. There he would groomed as heir to the Lego dynasty. Alas, Ulivo's mother was too attached (or shortsighted) and so he spent the rest of his youth in relative anonymity in Staten Island, New York.

His Lego Portfolio landed him in Staten Island Technical High School where he was at a slight disadvantage there being no Lego curriculum. In between barely passing Russian and Electronics he managed to take some wonderful drawing classes at Cooper Union.

In 1995 Ulivo began attending Tyler School of Art at Temple University. he took to art school like a fish to water. "I learned what kind of dedication was required in the studio and, that Rural kids did too much drugs." He was well liked by students and faculty. His tumultuous semester abroad in Rome may have been the high water mark of his pre-adult life.

After graduating Ulivo returned to Staten Island in order to brood, mope and swell to Taft-ian proportions. From the confines of his parents basement he hatched an ingenious plan to move to Pittsburgh. He ate his last good bagel on July 13, 2000 then spent the next three years doing puppet shows, painting and falling in love "Pittsburgh was like my Paris". Unfortunately Pittsburgh did not have a Sorbonne so in 2003 Christopher began his MFA at the Rhode Island School of Design. There he worked hard in the studio enjoying the competitive atmosphere. There were wonderful weekends spent apple picking and fishing with his fiance Goska.

After graduation Ulivo spent the Summer teaching in Rome with Rhode Island School of Design. He returned triumphant to New York. Soon after he moved back into his familial neighborhood of Bay Ridge, Brooklyn. Marriage, moderate successes and failures were quick in coming.

Painting, children and a move to California in 2012 became an inspired, if overwrought performance wherein he embodied the Brooklyn Dodgers in order to dramatize his personal loss of innocence.

Despite all this, he couldn't help wonder what would have been had he been adopted by the Lego corporation way back when: "If I could do it over again? I'd change lots of things -almost everything really".
Loading...